Bokkepootjes are a traditional Dutch biscuit (cookie) that look like this. The word bokkepootjes means “goat’s feet”.

As much as I love the Dutch, I think there is a little bit of artistic licence going on because when have you ever seen a goat’s foot that looked like this. But then, would you want to eat a biscuit that anatomically resembled a goat’s foot? Probably not. Because, when you think about it, what does the chocolate represent? It must have trodden in something, right? And just what could that ‘something’ be . . . ? I’ll leave it to your imagination and move on. 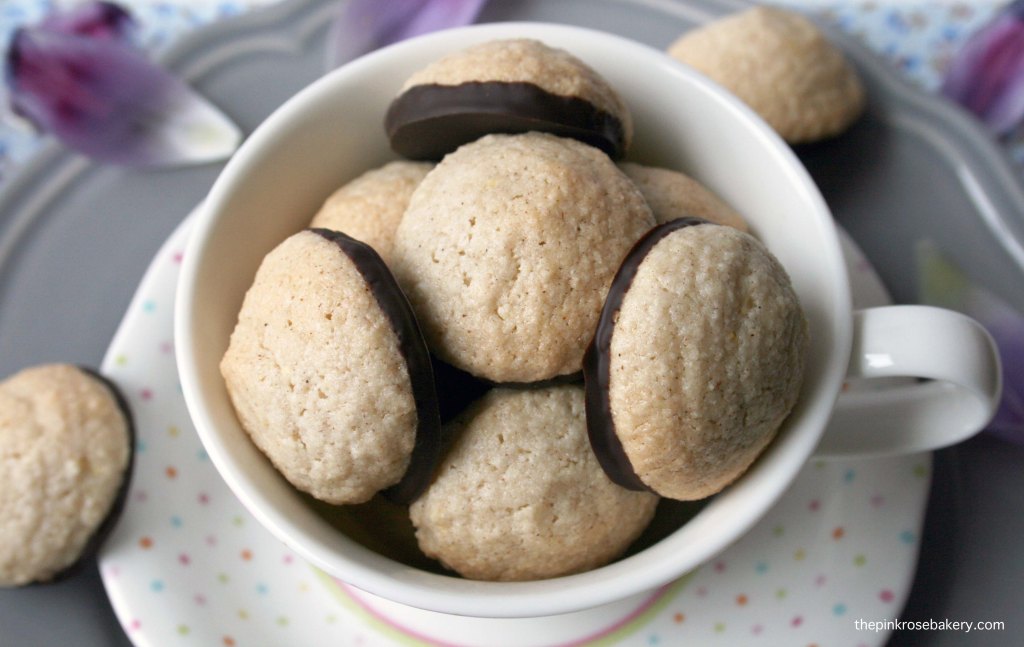 Since discovering that these biscuits are naturally gluten-free, I had to have a go at making them. I admit that they have been on the list for a while, partly because the recipe I found for them a) used a lot of eggs and b) was incredibly vague. Let me give you an example :

Beat the egg whites with a measure of sugar.

Leave to dry for several hours and then bake slowly, they are not supposed to go brown.

Alrighty then. Really informative, thanks.

I scaled down the recipe, because if they didn’t work I didn’t want to have wasted a mountain of eggs, and as for the method, the ingredients and description of the biscuits sounded like a cross between a meringue and a macaron, so those are the methods I used to guide me.

Whether these have the correct texture or not I can not say, because of all the Dutch food I have eaten over the years, a bokkepootje has never passed my lips. Very remiss of me. I have seen them in the supermarkets, but that is as far as it has gone.

The amount of mixture that my scaled down recipe makes meant piping them into a ‘goat’s foot’ was either going to result in two massive ones or several weird deformed miniature ones. Therefore I decided round blobs – or dumplings (or if you want to be really crass, droppings, but let’s not go there again) – were going to be the order of the day.

The outcome was these very moorish, very delicious little morsels. Delicately flavoured with lemon and cinnamon, the outer is very slightly crisp and the inner is soft, almost like a coconut macaroon, but made of almonds. And the thin layer of dark chocolate on the base finishes the whole thing off.

They may not look truly authentic, but I declare them a success all the same.