Given the fact that I am now transitioning from the deeper darker colours of autumn and winter to the lighter, brighter paler shades in my make-up collection, I thought that it would be a good time to have a little clear out of all things beauty related and get rid of any items that just haven’t cut the mustard.

This may be a kind of two-part post – this one which is getting rid of all the junk, and a second one focused around spring favourites, maybe. A more positive post to off-set the fact that, let’s be honest, this one is, by its very nature, going to be a little negative.

I went around with a basket and scooped up all the things that have been lying around unused and unloved, for various reasons. There isn’t as much as I thought there was going to be. I’m not sure if that is a good thing or a bad thing. 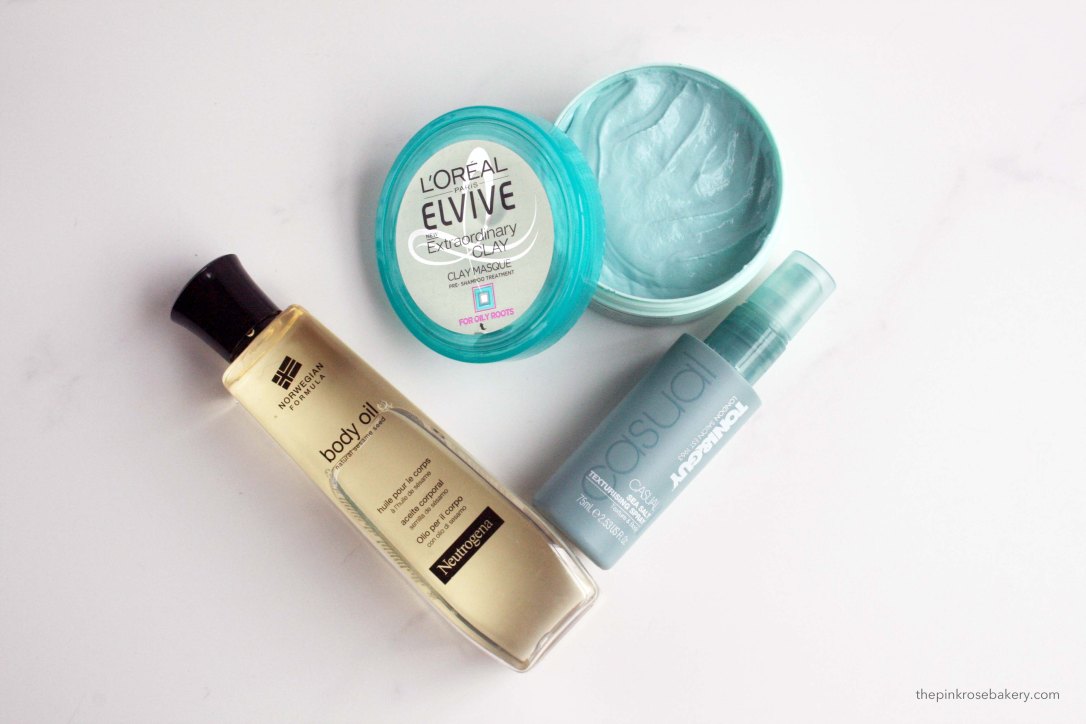 Neutrogena Norwegian Formula Body Oil – I bought this way back when, back in the days before I found my holy grail body moisturiser (Keihl’s Creme de Corp, if you were wondering) and I was still on the search. I do like the idea of a body oil, but it must not be greasy. I’m afraid to say that I have left a few greasy blobs on the bathroom wall where I have accidentally knocked my arm against it after having just used a body oil . . . This isn’t too greasy (from memory, as it has been a while since I used it) however it is the smell that I can’t cope with. It has that fake tan, what some call biscuit-y, what I call wet dog, smell. And no-one wants to smell like a wet dog. Not even a dog that is wet. I think it is because of the sesame oil in it. It isn’t overly strong when you smell the bottle, but it lingers and then it is all I can smell. Sorry Neutrogena, this is going down the sink and the empty bottle into the recycling.

Toni & Guy Sea Salt Texturising Spray – To be honest I am not entirely sure what caused me to throw this into my basket when I was in Boots. Three things I think: I was looking for a wavy texturising spray, I was after something that would give my hair a little bit of grip when I wanted to braid it, and it is a mini bottle so only cost a couple of pounds and was therefore no great shakes if it turned out to disappoint. Which it did. At first I thought it was going to work and then  . . . nope. Just crispy hair, no wave, no grittiness, just a pain in the arse to try and brush out.

L’Oreal Elvive Extraordinary Clay Masque – this is part of a new range from L’Oreal aimed at people with oily roots and dry ends, which is a category that I fall into, especially the oily roots part, not so much the dry ends, I have managed to combat those. The range (shampoo, conditioner, dry shampoo and this mask) all contain a blend of three clays which are supposed to gently remove the oil from your hair and leave it clean enough that you can go for longer between washes. I don’t have the shampoo or the conditioner and the jury is still out on the dry shampoo, however I used this mask once and I can’t bear to use it again. It is very thick, very heavily scented and by the time I had finished plastering it over my roots, as instructed, it had stained my fingers blue. Then I panicked slightly, because blonde hair with blue roots wouldn’t be a good look for me, and didn’t leave it on for quite a long as it said to (but only by mere seconds. It says to leave it on for 5 minutes and it probably took me that long to apply it). My hair did feel clean afterwards without feeling stripped, which is what I was worried about given the texture, but I can’t say I noticed any difference with regards to being able to leave it longer between washes. If anything, I feel it maybe made it a little greasier. Maybe I don’t have the right hair type. Maybe you have to use the whole range in conduction with each other in order to see any benefit. Who knows. Either way, I can’t risk having a head the colour of a Smurf.

Liz Earle Cleanse & Polish Limited Edition in Pink Pepper and Mint – I have mentioned in a previous post a) my true devotion and love for the original Cleanse & Polish and b) how the special editions just don’t hold up to the original. So why then, why, oh why, did I get suckered in by the promise of the scent of pink pepper and mint. It could have smelt amazing. Instead it smelled like a men’s grooming product, had a thiner, less effective consistency than the original and also made my eyes sting. I managed, through utter defiance, to finish this bottle. But no more. It is the original or nothing for me from now one. I. Will. Not. Be. Swayed. Again.

L’Occitane Immortelle Brightening Cleansing Foam – (little disclaimer: this is a travel size that was with a gift with purchase). I don’t hate this product but I don’t love it either. I have dry skin and find that this does dry it out a little. It is better suited for either a morning cleanse or a second cleanse as it doesn’t remove make-up very well. It does have a slightly weird musty smell. As I said, I don’t hate it but I don’t love it enough to warrant finishing the bottle or repurchasing. I didn’t really notice any difference in the brightness of my skin either.

L’Occitane Immortelle Essential Water – (disclaimer as above). Again a bit of a ‘meh’ product for me. It does feel a little bit more moisturising than some toners, but that is about all I can say about it. It didn’t wow me.

Estèe Lauder Advanced Time Zone Age Reversing Line/Wrinkle Creme SPF 15 – Firstly let me say that I don’t think I have quite reached the age where I need this cream, but it came in a set with Advanced Night Repair so I thought I would give it a go and see if it made any difference. Because it is SPF 15 it has that seaside/ozone smell of chemical sunscreen that I always notice even though here they have tried to hide it behind perfume. This particular pot is meant for normal/combination skin so I thought it wouldn’t be moisturising enough for me. Which is kind of true, in that it just sat on my skin, didn’t sink in and left me with a greasy film that remained for the whole day until I washed my face. Maybe when I do have wrinkles I will reconsider . . . for now it is adieu.

Laura Mercier Brow Definer in Fair (little round pot top right) and Eye Basics in Linen (bottom middle) – I have been using the brow definer for months. I really liked it. I have made a significant dent in it. I thought all was rosy in the brow garden. Then I caught sight of myself in a mirror at the Clinique counter in Boots and my eyebrows had a halo of yellow/orange around them! Not good. I don’t want orange brows and it amazes me that I have not noticed before. Anyway, it has been replaced with a product that I truly love (it is quicker to use and doesn’t give me orange brows. I will mention it in my spring favourites).

I bought the Eye Basics with the idea that I would use it as an eye primer. For years I had used the Bare Minerals one and then they went and made it all sparkly. At least the only one I could find was sparkly. I want a nude, matt, invisible eye primer. I thought this would be a good alternative. Sadly it creased and the tube dried out in days. Plus, it is quite thick and ‘obvious’ looking. Not at all what I was after. I have since converted to the Urban Decay one. I have a number of Laura Mercier products that I love – especially the second skin blushers and the eyeshadows – but sadly these two are not amongst them.

Rimmel Scandal Eyes Eye Liner in 005 Nude – I got this after watching twenty million beauty bloggers going on and on about how great this eye liner was and how it was a dupe for the MAC and Charlotte Tilbury one. I haven’t tried either of the latter (yet) however, whilst this did give a lovely clean finish to my bottom waterline -as intended – I think it hung around for about all of 30 minutes before disappearing. It says that it is waterproof which would lead you to believe that it would last in the waterline. But it didn’t on me.

Diego Dalla Palma Eyeshadow in shade 09 – This was lounging around by the tills in Marks & Spencer’s just after Christmas and was reduced to £2 (from £16). The formula is terrible – it pills and bobbles when I put a brush in it and it doesn’t blend well. Very glad I only paid £2 for it.

Max Factor Voluptuous False Lash Effect Mascara – This mascara has the biggest wand you have ever seen in your life! I was sure I was going to end up with it all over my eyelids, but the brush is so big it can’t possibly get anywhere near my eyelids! The bristles twist in a design that is supposed to lift your lashes, but it didn’t do much for mine. I didn’t really notice a difference in the volume of my lashes either. And then the final straw came when it caused my dermatitis on my eyelids to flare up (when removing it). A bit of a flop as far as I am concerned.

Clinique Chubby Sticks in Plumped Up Pink (the pink one) and Flowering Freesia Baby Tint (the purple one) – I am a little reluctant to throw these out because I do like the colours. Plumped Up Pink is a blue toned bright(ish) pink that is great for the summer months and although Flowering Freesia looks scary in the stick it is so sheer that it just provides a ‘have you got something on your lips, have you not?’ look which is just perfect for ‘no make-up’ make-up days. However, as much as I love the colours I just can’t get on with the formulas. They both say they are moisturising lip balms but I find them quite drying, which is sadly why they have to go. I have found a great alternative, but more on that in my spring favourites.

I have to do a spring favourites post now, don’t I? I have mentioned it twice!

So there we have it, the items that are no longer cluttering up my make-up collection and bathroom shelves.

9 thoughts on “Beauty Gossip: Time for a spring clean”