I have inadvertently made this week into swiss roll week.

It all started when I was mulling over what to make this weekend. It was Wednesday and I thought that seen as how I teased you with these photos the other week, I should really post one of them or before we know it we will all be ankle-deep in Christmas preparations and our thoughts will be elsewhere.

Going off on a slight tangent here (but I will come back, I promise), Great British Bake Off returned to our screens last week. I had absolutely no intention of doing any sort of bake-along or baking tie-in, but . . . when I saw that the signature challenge for the first episode was swiss rolls, well . . . one of those sneaky peak photos was a swiss roll. Hey, I could do a bake-along!

Hang on a minute, I said to myself, I thought we weren’t going to do that?

Well, maybe I’ve been a bit hasty. Maybe it would be fun. Besides, we can show those stuffy old GBBO producers / researchers that gluten-free baking can be just as yummy as that which contains gluten and maybe they shouldn’t be so quick to dismiss it. I can make gluten-free versions of the things that they make on the show.

So the long and short of it is that I’m doing a bake-along.

This may be a bad idea. Only time will tell.

Having made the decision that one of this weeks recipes would be the aforementioned swiss roll, I moved on to thinking about what else to make. And ran head first into another conundrum.

Whilst watching GBBO I had an idea for another swiss roll. An idea I wanted to make really badly. Could I possibly post two swiss roll recipes in one week? If I decided to post only one, which one would I chose? Maybe the new idea wouldn’t work, which would get rid of the conundrum altogether, but if it does (and I was fairly sure it would), what then?

Hence, it is officially swiss roll week on the blog and you are getting two recipes. Hope that is okay.

If it’s not, well, what can I say? Close your eyes and come back next week.

I’ll miss you though.

This first recipe is about as simple as it gets.

Chocolate sponge, cream and cherries. All rolled together and dusted with icing sugar.

Not a whiff of butter, oil or flour in sight (we have the great oracle that is Delia Smith to thank for that).

To tell you the truth I spread mine with some left-over cream cheese frosting that was lurking in the back of the fridge and needed to be used up. But if you don’t have any loitering cream cheese frosting then whipped cream is a perfect substitute – and to be honest the most common filling for this swiss roll in my house – which is why I have given you the quantity for it in the ingredients below. If you wanted to get really fancy you could throw a layer of chocolate ganche in there too. It’s entirely up to you. 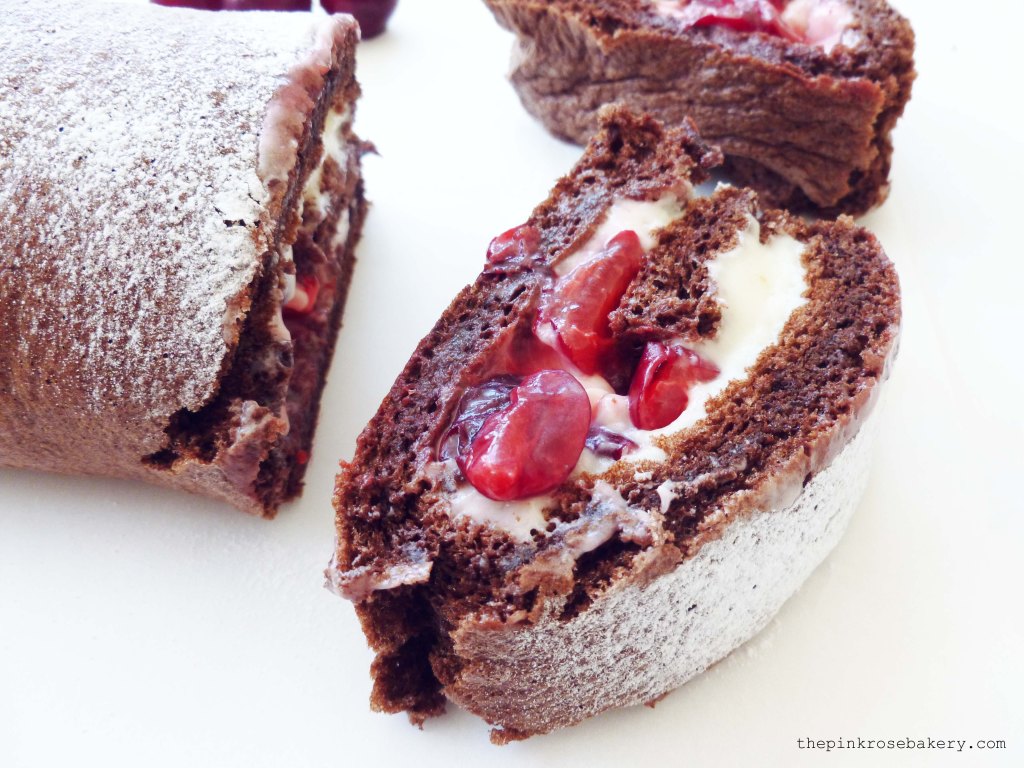