I realised a few weeks ago, that since starting this food-centric, gluten-free blog I haven’t covered anything that could be considered as ‘the basics’. Yes, we have had breakfast loaf, and hummingbird cake, and waffles, but where is the chocolate cake? The carrot cake? The red velvet cake? A basic vanilla cake that isn’t covered in sprinkles, the application of which can have potentially disastrous consequences?

Well, I’m working on it. But until then, we have chocolate cupcakes, which, let’s face it, is something everyone needs in their repertoire.

You will be pleased to know (or maybe not, depending on how you roll), that these cupcakes do not contain a list of flours as long as your arm. You can make them with your favourite GF plain (AP) flour. You can even make them with gluten containing flour if you can tolerate it.

The batter is more of a liquid and needs to be poured into the cupcake cases, but it results in a moist, slightly dense cupcake that is very satisfying to eat. Just be careful not to over-bake them (slightly under-done is preferable to slightly over) otherwise they will have a tendency to crumble and fall apart, which we don’t want.

Topped with some chocolate buttercream, they are a little bit of chocolate heaven.

Because Easter is now only around the corner, I, of course, had to give these cupcakes an Easter theme by smooshing the chocolate buttercream into a rough nest shape and placing 3 chocolate mini eggs in the centre (although you could also completely cover the top in mini eggs, like this, or head on over here, where Jennie has not only put mini eggs on top of a cupcake, but also in it. Why didn’t I think of that??).

It was also an excuse to use the fluffy little chickens I picked up in the supermarket a couple of weeks ago.

But these cupcakes are not just for Easter, you can decorate them however you wish, for whatever occasion warrants their creation. 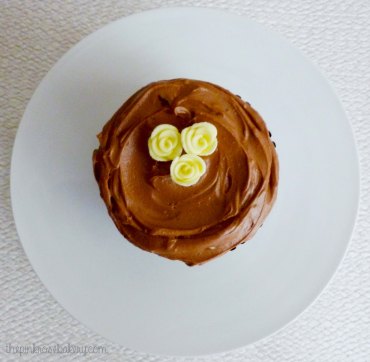 And needless to say, if you don’t want to smoosh the buttercream, then you could pipe it.

Chocolate Cupcakes with Chocolate Buttercream (and an Easter twist)

For the Chocolate Buttercream:

4 thoughts on “Chocolate Cupcakes – with an Easter twist”