I almost . . . almost called these little nibbles Cheese Chorizo Choux Canapes, because who doesn’t love a bit of alliteration? But then I came to my senses. I figured these needed to sound a bit more sophisticated.

We are heading towards party season and just because we are gluten-free doesn’t mean that we have to make do with a lump of cheddar and a segment of pineapple skewered on a cocktail stick, or worse, spend the whole night nibbling on carrot batons whilst plate upon plate of small sticky sausages, puff pastry delights and mini mince pies whizz before our (gazing longingly) eyes, setting our tummies a-rumbling.

I had heard somewhere, albeit a while ago, that choux pastry adapted well to being gluten-free. When I saw Michel Roux Jr. making cheese stuffed choux buns the other night, I decided the time had come for me to give it a go. I haven’t made choux pastry for years. In fact, I think the last time may have been many moons ago when I was 16 and it was for some apricot cream eclairs for my food technology practical exam. Given that many people go on about how difficult choux pastry is to make, I figured if I tackled it successfully at the age of 16 I could definitely manage it now that I am . . . much older. Besides, gluten-free baking has one glorious advantage over baking containing gluten – you can’t over work it!

However, all that aside, I was a little dubious when my choux pastry batter was not quite as stiff as I was expecting it to be. Normally choux pastry is piped, and yes, this could be piped, but it didn’t hold it’s shape terribly well. It reminded me of macaron batter – it will settle and flatten but not run all over the place. With a shrug of the shoulders I shoved the tray in the oven, turned my back on it and left it to its own devices for 15 minutes. When I returned . . . gloriously brown and puffed up choux pastry balls!

I used a silicone macaron baking sheet in order to ensure that they were all roughly the same size, however if you don’t have one you could either draw around an egg cup onto a piece of baking parchment to create templates / guides or you can just go free-form.

The cheese for this recipe took a little bit of finding. I had decided that I wanted to use a smoked cheese, but the majority on offer are cheddars. Not that there is anything wrong with cheddar (I live in Somerset, home of Cheddar, there is no escaping it), but I wanted something a little bit different. Following a visit to a local smoke house, Brown & Forrest, I found what I was looking for: smoked brie. It is smoked in the traditional way, over wood, rather than having liquid smoke added to it. They also smoke cheddar and stilton as well as mussels, eel, trout and salmon to name just a few. 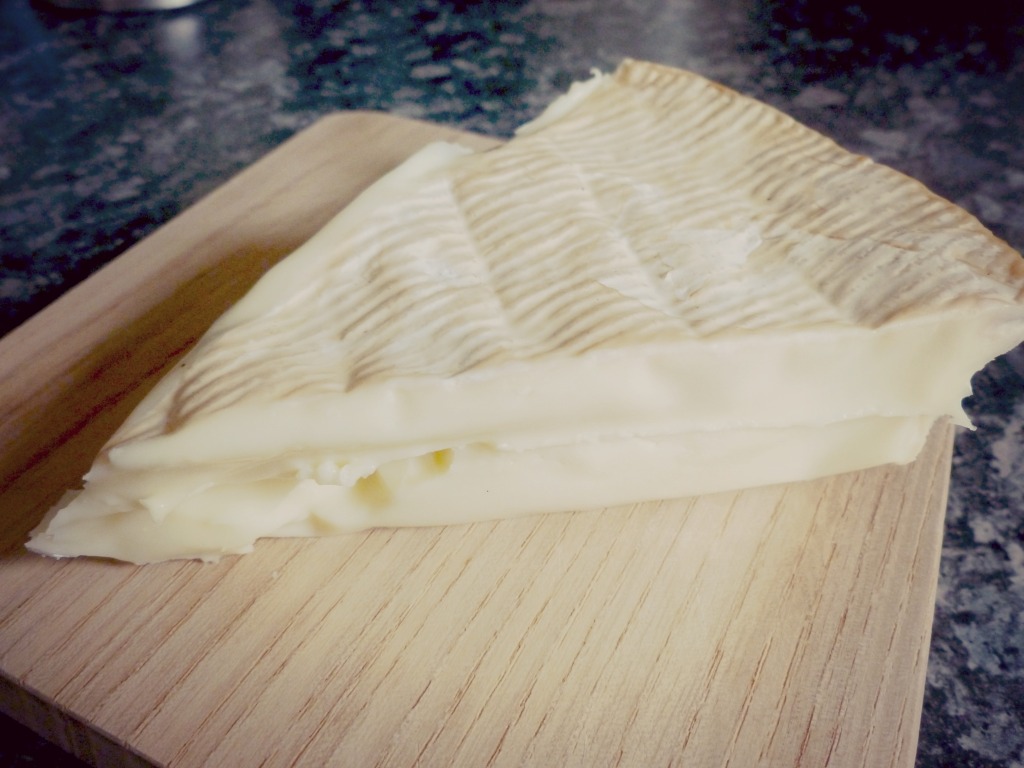 Are you pulling a face right about now? Has the mention of brie made your toes curl up? Don’t worry. That used to happen to me too. For years I avoided brie like it was a plague carrying harbinger of doom. But it turns out, if you cut the rind off then the inside isn’t all that bad. I still prefer it warm though – grilled or on a pizza – rather than cold and unadulterated on a cracker. However, if you really can’t cope with the thought of brie, then feel free to substitute it for another smoked cheese, or even just a different un-smoked cheese, if you like. I won’t be offended.

I wanted to add some little nuggets of something interesting (so that it wasn’t just a squidgy cheesy mush in your mouth), which is where the chorizo and mushroom come in. Plus the smokey, spicy nature of the chorizo compliments the smoked cheese well. 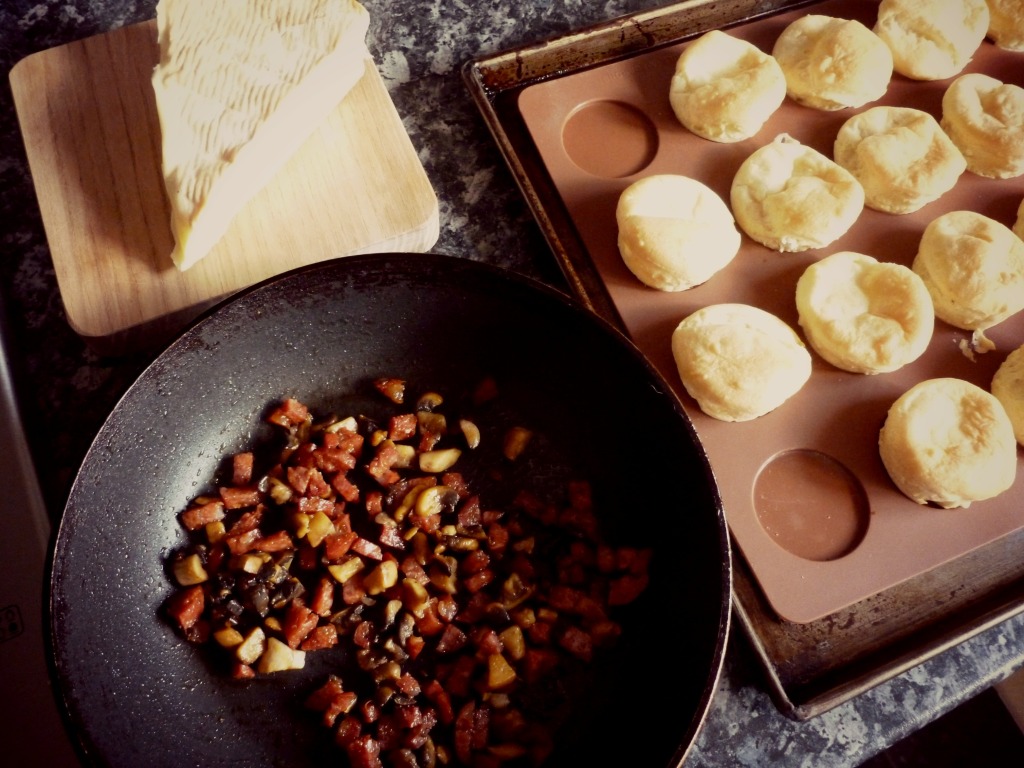 The mushroom is there to help soak up the orange oily juicy goodness from the chorizo, but if mushrooms make your toes curl up as much as brie does, then by all means leave them out. However be prepared for your choux to become a little orange. I’m just giving you a helpful heads up.

I cut each choux bun in half and arranged them like a little burger / sandwich but if a different configuration pleases you, then go for it. Just remember that these are supposed to be bite-sized morsels that are easily eaten at cocktail parties where one has a martini in one hand and a festive twinkle in one’s eye. 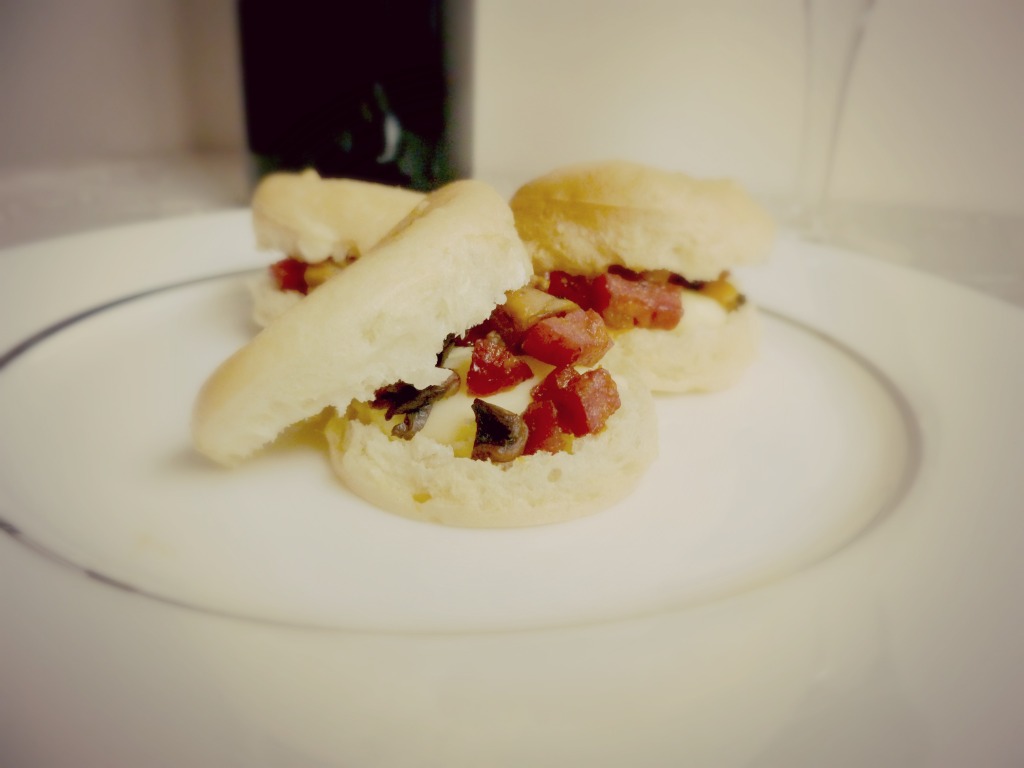 For the choux pastry:

(This post is part of November’s Cheese, Please! Challenge over at Frommage Hommage.)