On Sunday 25th May, Mum, Dad and I donned our wellies and headed towards the Dorset / Devon border where River Cottage HQ had flung open its gates and allowed us in to wander the grounds and peruse the stalls during the Food Fair. There were even talks on various different topics – from foraging to bread – to listen to if you wanted.

Wellies were mandatory as the day before it had rained all day. I am not exaggerating. It did not stop. And it wasn’t drizzly rain either, it was big fat drops of rain. Apparently everyone who had attended the fair on the Saturday had had to be pulled out of the field where they had parked by tractor. Fortunately it has stopped raining by the time the sun set, but that still meant that there was a lot of squelchy squishy mud around. We experienced a couple of mud slides whilst trying to park.

There was plenty to look at and taste. I tried cheese, locally made cordials, chocolate; red wine and blood chorizo and gin. Mum and Dad also tried cricket pate and caterpillar pate. I refrained. According to the gentleman whose stand it was, we will all be eating crickets and caterpillars in 20 years time because the current rate at which we consume traditional meat (beef, lamb, pork, chicken etc.) is not sustainable, so we are going to have to look for alternatives. To be honest, the thought of having to eat caterpillars is enough to make me seriously consider being vegetarian. And I don’t eat that much meat.

I also met these critters: 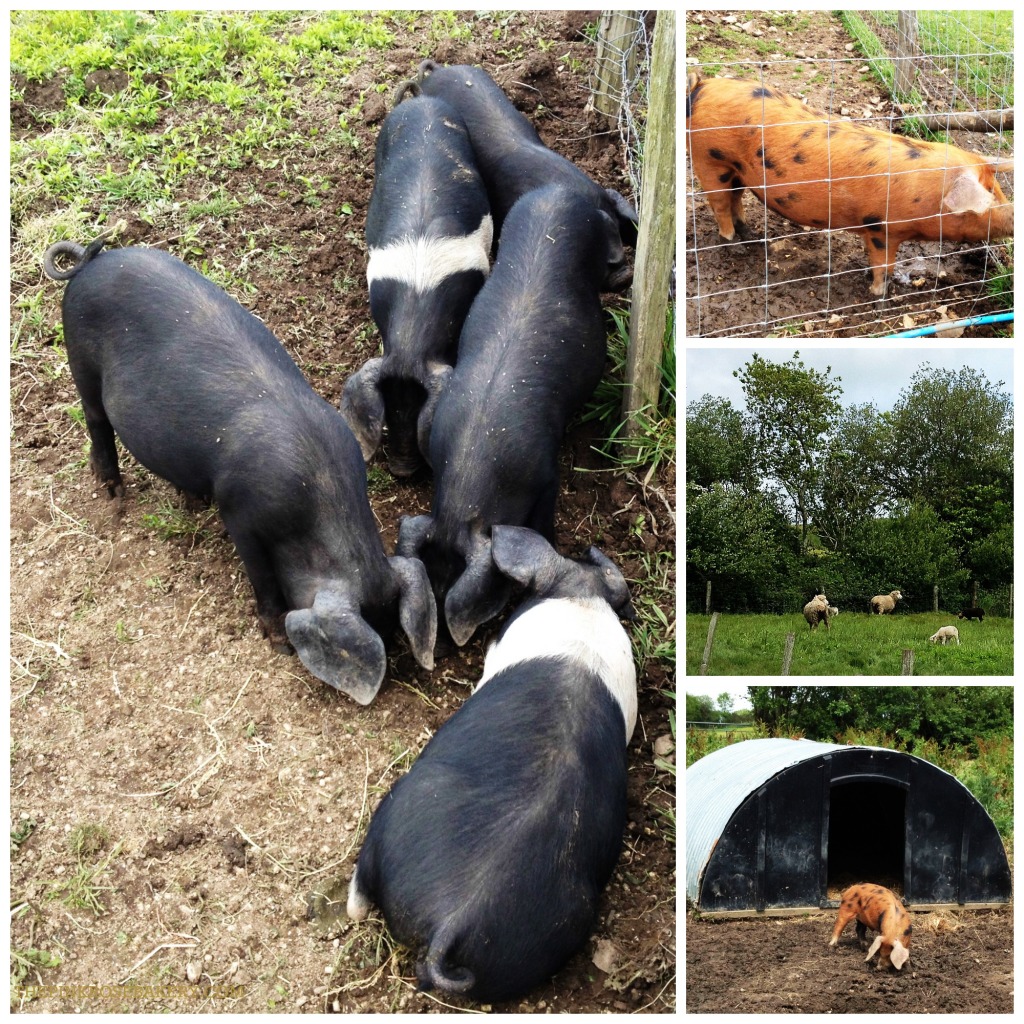 The piglets were adorable. I always think piglets are adorable. My cooing and babbled cries of “look at them, they are so cute” are usually met with a stern “you’re not having any.” Such spoil sports. The big pig (top right) very kindly wiped his snotty, muddy snout on my hand. It was nice to meet him too. And one of the black piglets took a fancy to a little girl’s purple welly and tried to eat it through the fencing. And to add to the comedy value, there was a picture of Hugh in the piglets pen that they took turns carrying around.

I even saw Gill and Tim, albeit in passing.

And to finish it all off we were hauled back to the car park up the hill in a massive trailer attached to a tractor.

Amidst all the frivolity, brisk chilly breeze and the mud, the main reason for my attendance was to take part in a gluten-free cookery class in the chef’s school.

The class was run by Naomi Devlin (that’s her in the purple top, prepping for the class), who is not only a nutritionist, but also a coeliac herself. So often classes / courses / recipes etc. that cater for gluten-free are not run by people who are themselves, so what you get is a slap-dash approach because we will be grateful for whatever we can get. This was not the case here. The school itself has a homely feel (although it did feel a bit odd wandering around it in my wellies) and you can get up to four people around each work station, so you get to chat to new people while you work. Naomi is lovely and has a lot of interesting things to say (more on that later).

It was nice to see that there was a mix of people in the class, from a retired couple to two teenage boys, but what was more surprising was that the majority of people there were not gluten-free themselves. They either had family members or friends who are gluten-free and they wanted to be able to provide them with something tasty and homemade. Or in the case of the teenage boy opposite me – he was doing a catering GCSE and for his practical element wants to do a gluten-free tea party, as his grandmother is gluten-free.

Our task for the morning was to make gluten-free shortcrust pastry that we were then going to turn into potato, cheese and leek pasties.

We made our pastry and our filling and then assembled the pasties. I had enough pastry for 4 pasties but due to time constraints I only managed to make 2 (some people did make 4, I don’t know how they did it because with two minutes to go before they had to go in the oven I still needed to egg wash the top of mine. I was obviously trying to make mine too perfect, even though I did over stuff the first one).

Now, I always thought that my pastry was pretty tasty, but let me tell you, Naomi’s is so much better. These pasties were one of the best gluten-free things I have ever eaten. I munched on one as I wandered around the fair afterwards, whilst it was still warm. My mum tried a bit and I was worried I was going to have to fight her for it (she is not gluten-free). They were delicious.

While the pasties were cooking we had a little Q&A session. Here are the main things that I took away from the class (beside my pasties):

I was so impressed with Naomi, her recipe and insightful knowledge that I have booked to go on the day course in July, where we will cover things like cookies and muffins and bread. Plus we will come home with lots of goodies and hopefully plenty of ideas. I am very excited.

All in all it was a very enjoyable and interesting day. Squelchy mud and hay in my eye aside.

8 thoughts on “A Day at River Cottage HQ”